The idea that events have a way of echoing times in the past is one of the central tenets of a new book being written by Caltech's Danielle Wiggins, assistant professor of history. The book, which is under advance contract with the University of Pennsylvania Press, examines the political approaches of Black leaders in the decades following the civil rights era, in which the movement for equality faced setbacks and struggles, and finds connections between them and the way Black leaders approached politics during another trying time for African Americans—the Jim Crow Era.

Wiggins, who joined the Caltech faculty in 2019, is now the recipient of two competitive fellowships intended to support her work on the book. Those fellowships are from the Institute for Citizens and Scholars, which supports "faculty members committed to eradicating racial disparities in core fields in the arts and humanities," and the American Council of Learned Societies, which aims to support major scholarly works in the humanities and interpretive social sciences.

We recently talked with Wiggins about the research she has done for her book, what she has learned, and what is next.

Your book looks at two political approaches taken by Black leaders—the politics of Black excellence and redistributionist politics. Can you describe those approaches for us?

I define the politics of Black excellence as racial uplift moved into the realm of political policy. Racial uplift has been a strategy in Black politics since emancipation, in which Black elites sought to reform and to prepare people in the Black community who were perceived as not being prepared to enter into mainstream integrated society.

As a strategy, it seeks to advance the race by proving African Americans' capacity and worthiness for full citizenship. Of course, there have been numerous critiques of this as class-based politics that sought to impose the white supremacist norms onto Black people.

At the same time, there's long been a more social democratic, sometimes socialist strain in Black politics that has sought to reform the structures of inequality rather than reforming Black people themselves. Those redistributionist politics were at a high point in Black political culture from the 1930s to the 1960s. Black activists were reimagining the capacity for state power to address the economic needs of not only of African Americans but really of all poor people.

That strategy expanded during the mid-20th century, when the federal government became more receptive to addressing racial and economic inequality, with the New Deal and Great Society liberalism seeking to shrink the class divisions. The civil rights movement coalesced at this moment when the federal government was more engaged and active in trying to protect marginalized people's rights and to redistribute resources.

Scholars have said that Black leaders broke from redistributionist politics in the 1970s and 1980s. What happened in those decades?

This is a moment when the golden age of American capitalism of the post-WWII era kind of came to an end. People were starting to talk about it in the 1960s, but it was really being felt by the time we got to the 1970s. Economic growth was subsiding and the willingness and capacity of the federal government to redistribute resources was also being curtailed, because they said they didn't have the money anymore. Redistribution programs were also being blamed for things like inflation.

At this very same moment, Black people were starting to enter positions of political power, particularly on the local scale. They were being elected to city councils and mayorships and to state legislatures.

So these political elected officials and civic leaders in the 1970s and 1980s were entering into positions of political influence and political power at this moment of retrenchment and figuring out, "How do we adjust to the problems that are emerging—particularly in cities because of these economic changes—when we don't have the old tools of governance that we used to have just a decade or two prior?"

I suggest that they pulled upon this strategy of Black excellence, which, once again, as it did in the late 19th and early 20th century, sought to reform Black people and reform their behavior so that they could survive in the conditions of austerity that defined the 1970s and '80s. I look at how these leaders sought to reform Black Atlantans, recognizing the limits of redistribution at that time, and how they argued that Black people needed to do for themselves what the government could no longer do for them.

You say in your book that this approach was not a clean break from the redistributionist politics that preceded it and that the two are interwoven. Is that correct?

There are a number of scholars who are trying to understand what Black political actors were doing in the 1980s in abandoning a lot of the redistributionist, social democratic, and progressive policies that they, some of the very same people, had advanced in the 1960s and 1970s. In general, they argue that politicians were being forced to adopt these neoliberal governing strategies, like privatization, corporatization, and public–private partnerships that shrink the scope of what the public sector is able to do for its citizens.

I think other scholars are right that those leaders were forced to make these difficult choices in the face of growing constraints on what they were able to do as public individuals. What I do, that's a bit different, is argue that they were using very traditional practices of uplift and discipline that emerged in conditions that were, in many ways, very similar to the conditions of the 1980s and 1990s.

Reconstruction following the Civil War was followed by a moment of white supremacist redemption when segregation became the law of the land and Black men had their right to vote stripped away. There was a retrenchment and a shrinking of the possibilities that would have been possible just a couple decades earlier. I think a similar sort of thing happened at the end of the 20th century with the civil rights legislation of the '60s being called out by the reactionary conservatism of people like Reagan, of course, but also Clinton as well.

As you just mentioned, your book looks in particular at Black leaders in Atlanta. Why was Atlanta well suited for this rise of a new Black political class?

Atlanta has long been a capital of Black political leadership, of Black culture, and of course of civil rights activism arising out of the Atlanta University Center, which is the consortium of Black colleges and universities that includes institutions like Morehouse College, Spelman College, Clark College, Atlanta University, and the Interdenominational Theological Center. Those institutes trained generations of Black leaders who not only would go on to be mayors of cities like Atlanta but would also go on to be in positions of political leadership and in cities across the country. They are really important sites in which a commitment to excellence was cultivated among African Americans. Those institutions were creating this class of reformers who were advancing these policies that sought to make all Black people as excellent as they learned to be in these institutions.

Atlanta is also considered the birthplace of the civil rights movement because that's where Martin Luther King was born and raised. And it's the home of the Southern Christian Leadership Conference, which was the organization that pulled together a number of mass movements into a national movement.

And then the last important factor is that Atlanta elected its first Black mayor, Maynard Jackson, in 1973 and has had a Black mayor ever since.

So it really has this established history of Black political power is very important to the city's idea of itself. It's been called a Black Mecca or the Black Mecca of the South since at least the 1970s. It was historically home to more Black millionaires than any other city.

This imagined vision of Atlanta has a lot of cultural significance among African Americans, and it makes it just a really rich site.

You have received two fellowships to work on this book. Can you tell us about them?

The first fellowship is called the Career Enhancement Fellowship for Junior Faculty and is through an organization called the Institute for Citizens and Scholars. That fellowship is for professors who are in their third year, and it gives them sabbatical time to work on their projects. It is specifically geared toward underrepresented faculty members who are working to advance diversity, equity, and inclusion on their campuses as well. But the cool thing about that fellowship is that you're paired with a mentor who can provide guidance on the nitty-gritty process of publishing your first book, publishing journal articles, and professional development.

For that fellowship, I'll be working with a historian named Leah Wright Rigueur of Johns Hopkins. Back when I was in an undergraduate, I came across her work, and that got me on this political history trajectory that I do, so I'm very excited to be working with her.

Then the second fellowship is the ACLS, which is the American Council of Learned Societies. And that is a fellowship for humanists. I think, for the past couple of years, they have specifically geared that fellowship toward untenured faculty members, and so that one is a broad fellowship for anyone that does work in the humanities.

How much of a difference do these fellowships make for you?

It means that I can spend more time on the manuscript. Before I found out that I got these fellowships, I was trying to imagine how I would schedule my teaching so that I could go on research trips and also schedule my teaching around when I anticipated I would get reviews back and when I would need to do the revisions. But now they clear that time entirely so that I can slow down a little bit and return to the archives and do some of the things that I have wanted to do with this project.

One of the things I wanted to do was release this book in the fall of 2024, during the presidential election. I don't know who will be running, but if our current vice president runs, she is this sort of politician whose origins I describe in my work. I want to release the book potentially at a time when people would be very interested in these questions of Black politics and black Democratic leadership in particular. 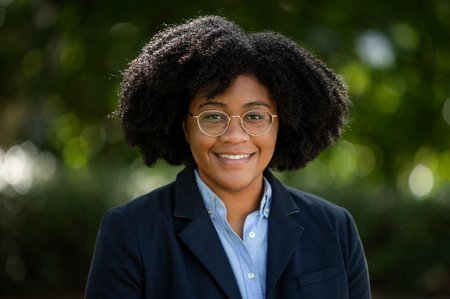